Cultures from other parts of the world. 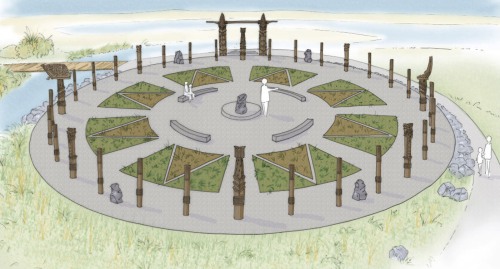 For thousands of years, Austronesian (南島) navigators (Tohunga) piloted primitive, double-hulled sailing ships called “waka” across vast stretches of the Pacific and Indian Ocean. These highly-trained sailors traveled across hundreds or thousands of kilometers discovering uninhabited islands, creating new colonies, and developing trade networks. What’s hard to believe is that these navigators traversed these great distances using no technology or maps, but instead relying on tuning into the stars, winds and Mother Nature. According to many scholars, these skills brought ancient ancestors from Taiwan to settle the vast area known as Austronesia, including the Philippines, Hawaii, Easter Island, Madagascar and New Zealand. 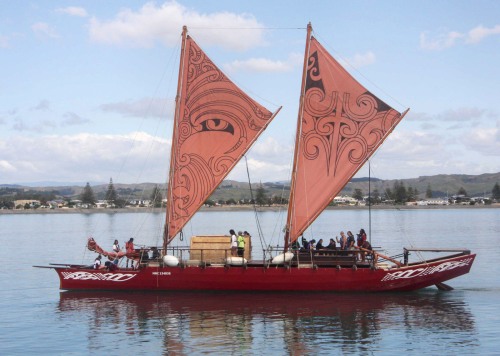 Up until modern times, these traditional sailing methods had been preserved by Polynesian peoples. There has been a recent revival of this method of transport, and to prove to the skeptics that the accuracy of guiding “waka” does not rely on luck, a new generation of navigators continues to sail between distant islands with no maps, compasses or GPS systems. 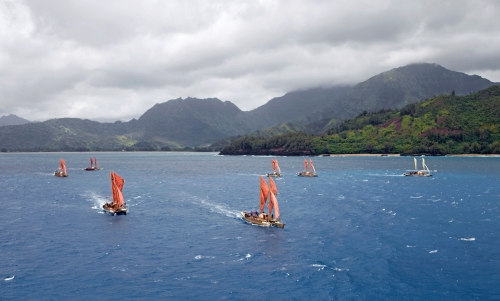 One group in New Zealand that prioritizes the preservation of this tradition is Te Matau a Māui Voyaging Trust, which manages a program called Waka Experience. The organization is led by Chairman Piripi Smith, who is an experienced Maori navigator. The Trust is partnering with Hawkes Bay Regional Council to undertake an ambitious project to build a large public project called the Star Compass. Not only will the project serve a functional purpose, it will also revitalize the historic Waitangi area.

The Star Compass will be used primarily as an education resource for a wide range of groups; trainee navigators of waka hourua, waka crew, school, youth and community groups. Visitors and tourists to the region will be able to understand the basics of how celestial navigation works. When asked why he was personally committed to this project, Piripi Smith stated, “It’s important to me as a trained navigator, as I now have a responsibility to pass this knowledge on to future generations, like it has been passed onto myself from my mentor Jack Thatcher.” 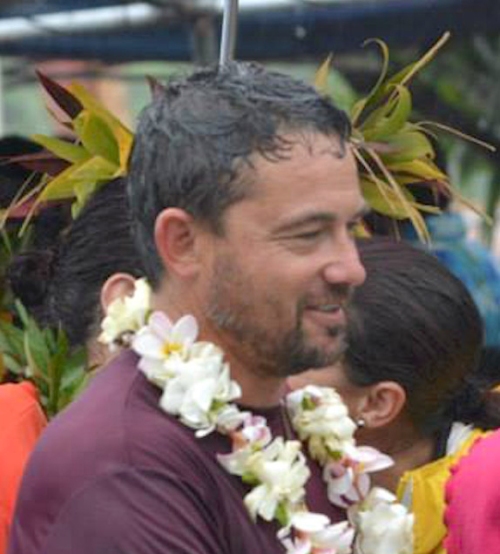 The Te Matau a Māui Voyaging Trust worked with the ATAYAL organization and the National Museum of Prehistory (國立台灣史前文化博物館) in Taitung City (台東市) to select a design for the West Pou. Seeking a more authentic connection to their ancient ancestors, they sought an indigenous design from the appropriate region of Taiwan and time period. Chairman Smith explained, “We want to incorporate an ancient indigenous Taiwanese design so we can tell the story of where the voyages of our ancestors started.” 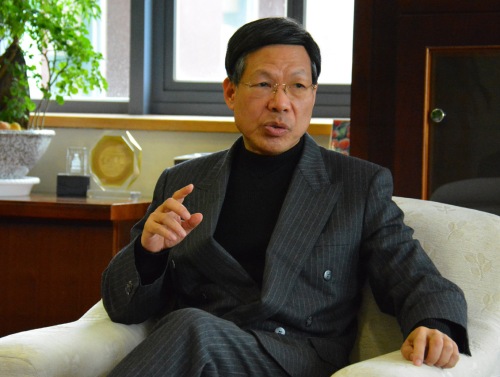 The museum houses the largest collection of ancient Austronesian artifacts from the island. Its director Shan-nan Chang (張善楠) and his staff presented an assortment of ancient pieces from the Beinan (卑南) people, who lived in Southern Taiwan over 2,000 years ago. The museum considers this cooperation significant for helping Taiwan expand its international connections and to help the Maori in New Zealand connect with their roots. Director Chang stated that the project aligns with the museums original mission to expand Austronesian studies through its cultural connections, and expressed, “It is our honor and responsibility to reinforce the relationships for the Taiwanese people.”

Piripi Smith’s team has chosen the main indigenous design, which is from a Beinan Period jade artifact, as well as some other design elements to use in Taiwan’s pou. He is currently in a fundraising stage to build the project. The Star Compass project is tentatively scheduled to open in February 2017, depending on the success of finding sponsorship and other funding. 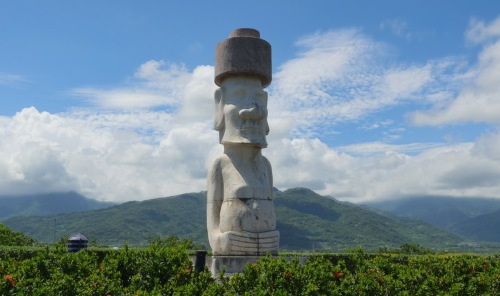 Director Chang hopes to attend the opening ceremony of the Star Compass in New Zealand. When asked about what the design provided by his museum may mean to the Maori in New Zealand, he remarked, “This star compass project is really wonderful, because they can see an authentic design and feel the similarities of the connected cultures from the totem pole design.”

When the Taiwanese people look at projects like this, they shouldn’t underestimate what international opportunities Taiwan’s Austronesian heritage can provide for its future. 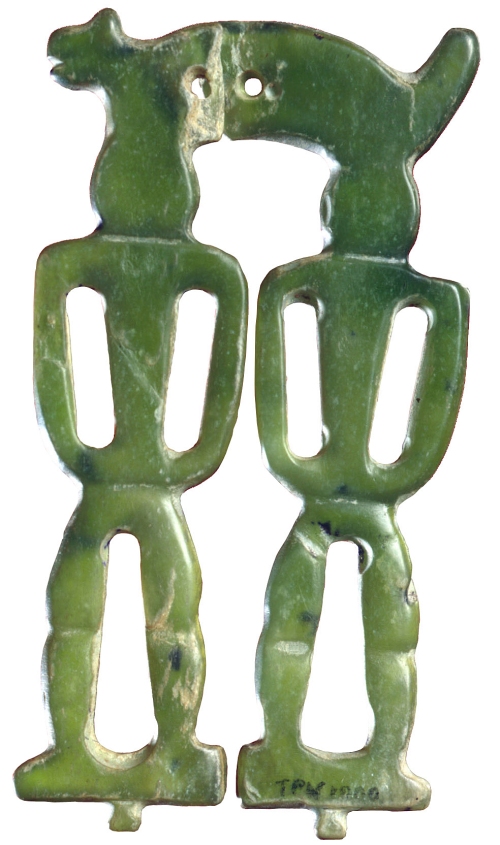 The ornamental jade ornament from the Beinan Cultural Period chosen to be used in the Star Compass project. Photo provided by the Taiwan National Museum of Prehistory.

Grand opening of the new ChiMei Museum fulfills a dream 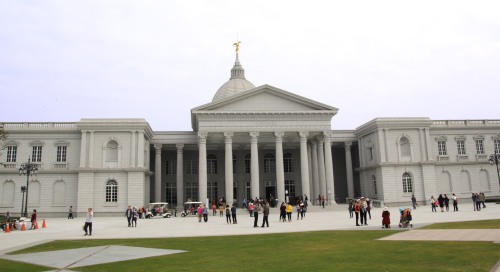 The exterior of the new ChiMei Museum.

On January 1, 2015, the new ChiMei Museum (奇美博物館) opened its doors to the public in Tainan City. When I visited, the sharply-dressed staff of about 100 people were busy greeting guests, polishing brass railings and adding the final touches to the exhibits. When I entered the grand lobby, I paused to take in the splendor, which was unlike anything I had ever seen in Taiwan. The museum has a striking resemblance to the Smithsonian Museum in Washington, DC, which I have visited several times. 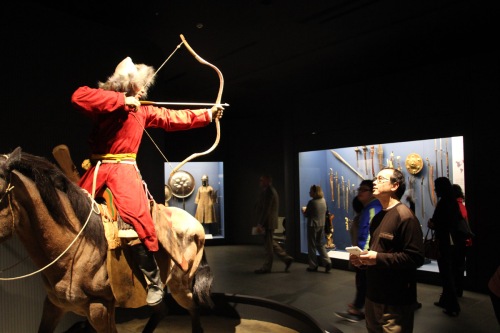 The new museum proudly displays 10,000 pieces of its collection, much more than the 5,000 pieces once displayed in the old ChiMei Museum. Visitors casually strolled through marbled hallways to marvel at the collection of preserved animals, classic works of Western art, cultural relics, and of course, the prized ChiMei collection of violins. The new building is, in itself, a treasure, a new iconic landmark in Taiwan, providing 40,000 square meters in exhibit space. 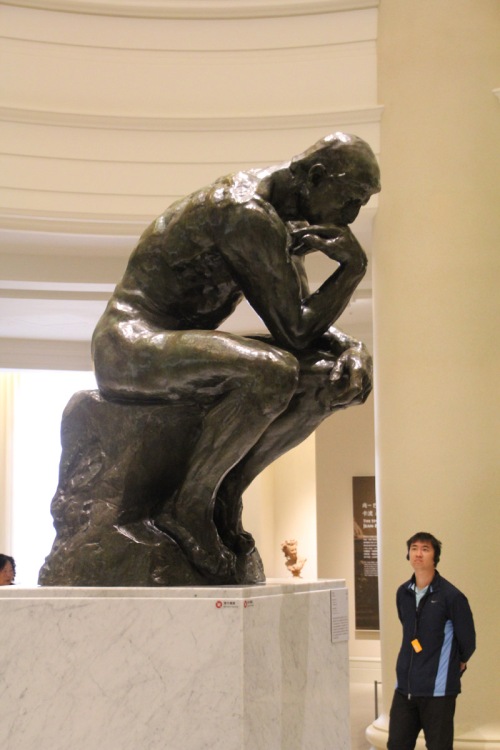 The famous Thinker statue on display in the Rodin exhibit gallery.

I was surprised when I learned that the ChiMei Museum is that this grand vision began with the childhood dream of Mr. Wen-long Hsu (許文龍). When he was a small child from a very poor family in Tainan City, during the early 1940’s, he often visited a local Japanese cultural museum. The young boy visited the museum to “escape” from the hardships of wartime to let his imagination fly to Japan. It was incredible to him, that even during a war, the poorest of people could experience the culture of a faraway place. He made a promise to himself, that when he grew up, he would offer the same type of uplifting cultural experience to the people of Taiwan. Little did he know then that he would grow up to found one of the most successful companies in Asia and grow a private, world-class collection of fine art and cultural artifacts. 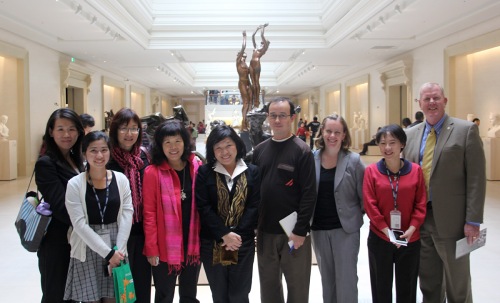 A delegation from AIT visits the ChiMei Museum.

I am certain that the ChiMei Museum will attract foreign tourists and Taiwanese visitors. I don’t think that Mr. Hsu, as a young boy, could have imagined the magnitude of what he would gift to the people of Taiwan. It’s hard to believe that the project of building a suitable museum for the ChiMei collection, which began in 1988, almost failed to materialize on many occasions and for many reasons.  On the first morning of 2015, the organizers, like Patricia Liao (廖婉如) could bask in their accomplishments after overcoming stressful challenges with sometimes very creative solutions. Because of their commitment, the ChiMei museum is a crown jewel of culture available to everyone who visits Tainan City, the ancient cultural capital of Taiwan. 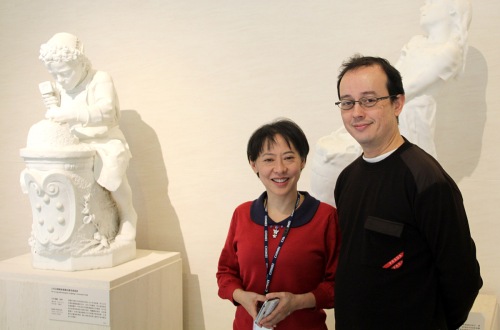 “I would like our museum to spark the interest of young Taiwanese to reach out to the world in order to become global citizens who are proud to share their culture and open to discovering the cultures of others.” — Patricia Liao, Deputy Director, ChiMei Museum

Visitors who wish to tour the new ChiMei Museum can visit the web site (http://www.chimeimuseum.org) to place a reservation. Demand is high, so you may have to wait 3-4 weeks for an available day you can visit. Admission is free for Tainan City residents and NT200 for non-residents. The museum is open every day, except for Mondays from 9:30 am – 5:30 pm. You can also call (06) 266-0808 for information. The location is No. 66, Sec. 2, Wenhua Rd, Rende District, Tainan City 71755 (71755臺南市仁德區文華路二段66號).

When I walked into one of my high school classes on Monday, I saw something I never thought I would see. I imagined I would find the likeness of Christ in a bowl of porridge before I would ever see an entire class of 60 high school students do this. At the class leader’s command, they all stood up in unison, smiled at me, and bowed deeply. When they rose, they all thanked me for being their teacher for a second straight year. Afterwards, the class leader presented me with a small gift.

Why did they do this? Were they all just raised to be extraordinarily respectful and humble? Was there something in the water on that day? Were the planets aligned?

It wasn’t Teacher’s Day or my birthday. I was caught totally off guard, and it was hard to hide my emotions. Even though the gesture was small, it seems incredible enough for me to want to film it for all to see. I grabbed my small video camera and asked them to re-enact it for me. It wasn’t nearly as good the second time, because they are shy, but at least it gives you an idea of what gratitude looks like.

Who says there is no appreciation and respect for teachers these days? It only shows you that teachers can still find appreciation in Taiwan and other places in the world for what they do.